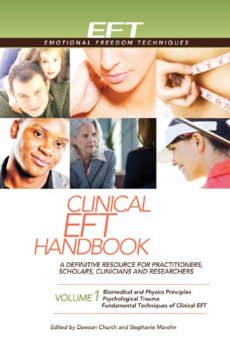 EFT has benefited from a sustained research program over the past decade.

One of the goals has been to meet the standards for "empirically validated treatments" published by the American Psychological Association's (APA) Division 12 Task Force, as well as the "evidence-based practice" standards of the US Government's National Registry of Evidence-based Programs and Practices (NREPP).

You can read more about these standards, and about the dozens of clinical trials of EFT, on our the EFTUniverse Research Pages.

A critical review of 50 peer-reviewed clinical outcome reports and systematic studies of EFT and TFT published in an APA journal, Review of General Psychology, states:

"A literature search identified 50 peer-reviewed papers that report or investigate clinical outcomes following the tapping of acupuncture points to address psychological issues. The 17 randomized controlled trials in this sample were critically evaluated for design quality, leading to the conclusion that they consistently demonstrated strong effect sizes and other positive statistical results that far exceed chance after relatively few treatment sessions. Criteria for evidence-based treatments proposed by Division 12 of the American Psychological Association were also applied and found to be met for a number of conditions, including PTSD." (Feinstein, 2012).

While there are many formal and informal variants of EFT, the form of EFT validated in over 100 studies and conforming to APA standards is called Clinical EFT™.