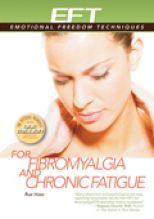 Five months ago I taught Sue (not her real name) to tap.  She has been a practice member of mine for 7 years.  In the morning, her pain was so bad that it took her 4 hours just to get off the couch. Sometimes she didn't get off of the couch all day. She no longer rode motorcycles or antique shopped with her husband. She had been diagnosed with fibromyalgia. Sue had gotten better over time and was riding motorcycles and shopping with her husband, but she still had some nagging pains.

Today she came in for a session and began talking about her shoulder pain (rated at a 10 on the 0-10 scale). I asked if she was tapping.

Dr. Kay: What are you saying about your shoulder pain?

Sue: Even though I have this shoulder pain, I completely love and accept myself.

Dr. Kay: If your shoulder could talk what would it say?

Sue: I know it would say that I am still angry at the man that hit me.

Dr. Kay: Are you willing to tap on this issue right now?

Dr. Kay: Tell me about the accident. When was it? What happened?

We then tapped on: Even though I had that accident 12 years ago, and it filled my right shoulder with pain, and I'm still angry at the man that hit me... She reported moving from a 10 to an 8 on a scale of 0 to 10.

Dr. Kay: Tell me some more about the accident.

Sue: That man said that I wasn't hurt. He didn't help me. Someone else had to help me. I am still so angry at him.

We then tapped on: Even though that man said I wasn't hurt, the pain that remains in my shoulder, how mean the man was to me, he didn't know how I felt, what made him think that I was not hurt, how angry I still am at that man, he didn't help me...

We called him a few choice names, which made Sue laugh and helped her talk louder while tapping. At this point, she said that she thinks about the accident every day, blaming this man, and holding on to the anger. She said, "That is so silly, isn't it? He is not thinking about me." Now she was at 6 out of 10.

Dr. Kay: Tell me more about the accident.

Sue: The car was brand new. I had wanted that red car forever. Now it was a mess. I felt so devastated. He didn't even have insurance.

We tapped on: Even though my car was brand new and I had wanted it forever and it was now a mess... This brought Sue down to 3 out of 10.

Sue: I feel so much better. The pain is going away.

Dr. Kay: Is there anything else that comes to mind?

Sue: He didn't care about me or my car.

We tapped one more time: Even though the man that hit me didn't care about me or my car… After a round of tapping, I had Sue, with her hand on her heart, say that she forgives herself and the man that hit her. They were both doing the very best they could.

Sue was now at 0 out of 10! She was so excited. She said, "I see! I needed more details. My shoulder has hurt for 12 years. The pain is completely gone. Amazing!"

We talked a few more minutes. All Sue could do was laugh. She said she felt so light and happy. What a relief to lay down a pain she had carried for 12 years.

Checking in 1 month later, Sue said that she has had no shoulder pain and that her life is changing for the better every day.