How to Rebuild a Happy Childhood with Matrix Reimprinting and EFT 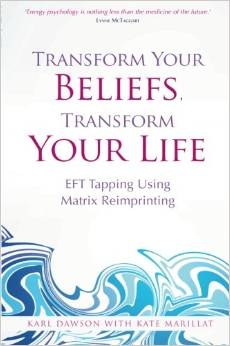 "Sandy" had become financially dependent on her boyfriend, and after months of looking for work, had become stuck in procrastination. She was feeling terrible and in despair about getting a job.

Sandy also suffered from chronic sadness and sensitivity her whole life, but her low self esteem from being out of work was making it unbearable. She found herself crying every day, and was becoming afraid to go out.

Sandy blamed all of this on her mother.

As far back as she remembered she’d felt unloved and unwanted. Her needs always came last, and her mother would threaten to leave the family any time Sandy was upset or cried.& Sandy was quite bitter about this. She wanted to scream at her mom: “Look at what you did to me!”

After some initial tapping to bring her intensity down, I helped Sandy successfully work through several specific memories using Matrix Reimprinting. At that point we hit the jackpot and, as you’ll see, were escorted right to the original source of her troubles.

In the first memory Sandy was about 10-years-old. A friend invited her to go swimming at the YMCA and they had to take a bus across town to get there. Sandy’s mom was supposed to pick them up and was very late. It was getting dark and Sandy was scared and began crying in front of her friend.

I had Sandy step into the picture as her adult self and begin tapping on the 10-year-old girl she was. In Matrix Reimprinting we contact the parts of ourselves (echos) that split off at the time of a trauma. We do EFT directly on them and help them change the scene they’ve been stuck in.

Sandy’s “echo” told us she felt scared, and then as we tapped, embarrassed, unimportant, and abandoned. Once these feelings cleared we asked her how she would like to change the situation.

The ten year old echo wanted a cop to come and give her mom a stern lecture for being irresponsible. After this we tapped on Sandy’s mom in the picture, asking why she was so neglectful. Mom took us back to a time when she herself was around 9 or 10 years old. Mom had been a latchkey kid, somewhat unusual for that time.

She felt very sad and neglected herself.

So we tapped on Sandy’s mom’s younger self and helped her change that latchkey picture. Her dad got a big raise and her mom (Sandy’s grandmother) got to be home with her again. They went to Macy’s and had lunch together and were very happy.

We reimprinted that scene for Sandy’s mom’s younger self. Returning to the original memory outside the YMCA, we found Sandy’s mother much more relaxed and caring.

Sandy’s echo then wanted Mom to take her and her friend out for ice cream and they had a marvelous time together.

In the next memory, Sandy was about 4 years old, lost and alone in a supermarket isle. Sandy tapped on the little girl who was feeling intense fear and confusion. When the feelings cleared, the echo wanted mom to find her, swoop her up in her arms and say, “There you are! I was so worried!”

Her mom put her in a shopping cart seat and gave her a big lollipop!

When we reimprinted this scene, Sandy had tears of joy streaming down her cheeks and said, “I feel like my heart is exploding with happiness!”

This was beyond anything I’d hoped to achieve, but we still had time left in the session, so we went back into the new picture with her little 4 year old (enjoying that lollipop) and asked her if there was another younger Sandy who needed some help.

Instantly Sandy saw herself as a newborn baby, isolated in an incubator, alone in a hospital room. She was astonished to “remember” that her mother had had some sort of rash on her thighs.

The doctors had worried the baby might have caught this rash during the delivery, so they’d whisked her away from mom, and then isolated her so that she wouldn’t infect other newborns in the nursery.

Sandy was able to communicate with her newborn echo, who was feeling extreme confusion, distress, isolation and sadness. We tapped for her and also for her young mother, who was feeling anguish at having her baby taken away.

We changed the picture by reuniting baby with mom, so they could nurse and cuddle skin to skin, developing that vital biological bond that had never happened. This felt incredibly profound. This was the new picture we reimprinted.

After so many years of feeling “I just want to be taken care of”, Sandy finally had that feeling deep in every cell of her body.

Checking in with Sandy about a month later, her relationship with her mom has really improved. She feels that her mom actually changed somehow, as a result of our tapping on her in the Matrix!