Have you ever worried that you sabotage your relationships? Or that you unconsciously drive people away?
Find out what your personal attachment style is and take the quiz with this special report!
Download it now for only $7 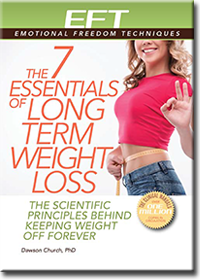 A small percentage of dieters succeed in keeping weight off permanently.
Learned simple yet specific behaviors that keep you healthy!
Download it now for only $7

Attracting the Right Person with EFT and an Open Heart 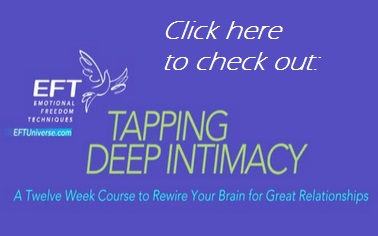 One of my colleagues, has a knack for intuiting the specific phrases or types of past experiences one should look for to tap on.

I've been wanting to work on one issue in particular: that I attract, and am attracted to, men who tend to be emotionally unavailable.

When I asked Honey about this, her reaction was that this is the case because I, myself, am afraid of giving love: their emotional distance makes them “safe” for me.

She suggested that I find an emotional event in the past where I gave/offered love and was hurt, but I racked my brain and just couldn’t think of anything in particular.

However, just a few days after our meetup I went through the most recent EFT newsletter and read about how a woman who changed her name had unknowingly dramatically impacted her life through that action. This was an interesting concept for me, as I went through the process of legally changing my middle name six years ago.

I did it because my middle name was my “evil grandmother's” (yes, it’s not just stepmothers where this is an issue!) and she'd done some particularly hurtful emotional blackmailing over the holidays that year. I’d had enough, and decided to legally change it.

I started tapping using the phrases suggested in the article, and as I was tapping on the third statement, I had an epiphany: when I changed my name, I closed my heart off from her, and from anyone else who was supposed to love me.

I assumed from past experience that such people would either leave me or hurt me. (My abandonment issues have been the subject of many other hours of successful tapping, and I won’t go into that here!)

Some past experiences with her, as well as with some of my other relatives, taught me that I would be treated meanly and silenced by the people who were supposed to love me unconditionally; that I would never be good enough to receive their love. So, the safe thing to do when I reinvented myself as "Emily _____”, was to do so with a closed heart that would protect me from hurt.

And, looking back, the romantic relationships I have had from that time forward were not particularly loving, and I had a lot of doubts about them from the beginning – it always felt as though there was something big missing.

When I got out of the last one 3 years ago, which had not been long but had been emotionally abusive, I decided that I was just going to date casually, have fun, and figure myself out. I did that for 2 years, finally decided that I was ready for a serious relationship, but then the men who kept appearing in my life and who I found attractive ended up being emotionally unavailable.

They seemed like great guys at first, but they quickly ran off because of their own issues and insecurities, without giving me any of the love I deserved, and I just kept feeling hurt.

So, I started tapping with, "Even though Emily _____ closed her heart off when she stopped being Emily _____ ... " and WOW, that got quite the emotional reaction!

I tapped on that for a long time and the intensity went from a 10 to a 2 in a few rounds. I then integrated the part of the third statement from the article about "...I respect and embrace all of me and all I have ever been through no matter what my name was or what I used to be called", and got that intensity down from a 7 to a 0.

I then visualised my heart radiating white energy out toward other people and I tapped on "what if my heart was open to giving love to others?" for a round before switching to "what if my heart was open to receiving love from others?", at which time I visualised my heart receiving brilliant white light from the people in my life. Again, my intensity on this went from an 8 to a 2 after a round of tapping.

It was all quite powerful.

Following this, I did a couple more rounds using Pat Carrington’s Choices method: "I choose to know that I am Emily ____ and that my heart is open to giving and receiving love", getting my intensity down to a 0. Finally, I turned to using the tapping phrases suggested in Carol Look's "What If" in regard to relationships, followed by the sequence she does more generally on abundance (changing the phrasing to “abundantly happy and successful”, rather than “abundance and wealth”), and wow, that was awesome!

By the time I tapped through all of her phrases, my energy felt like it was humming and radiating outward, and I felt as though all the possibility in the world was open to me.