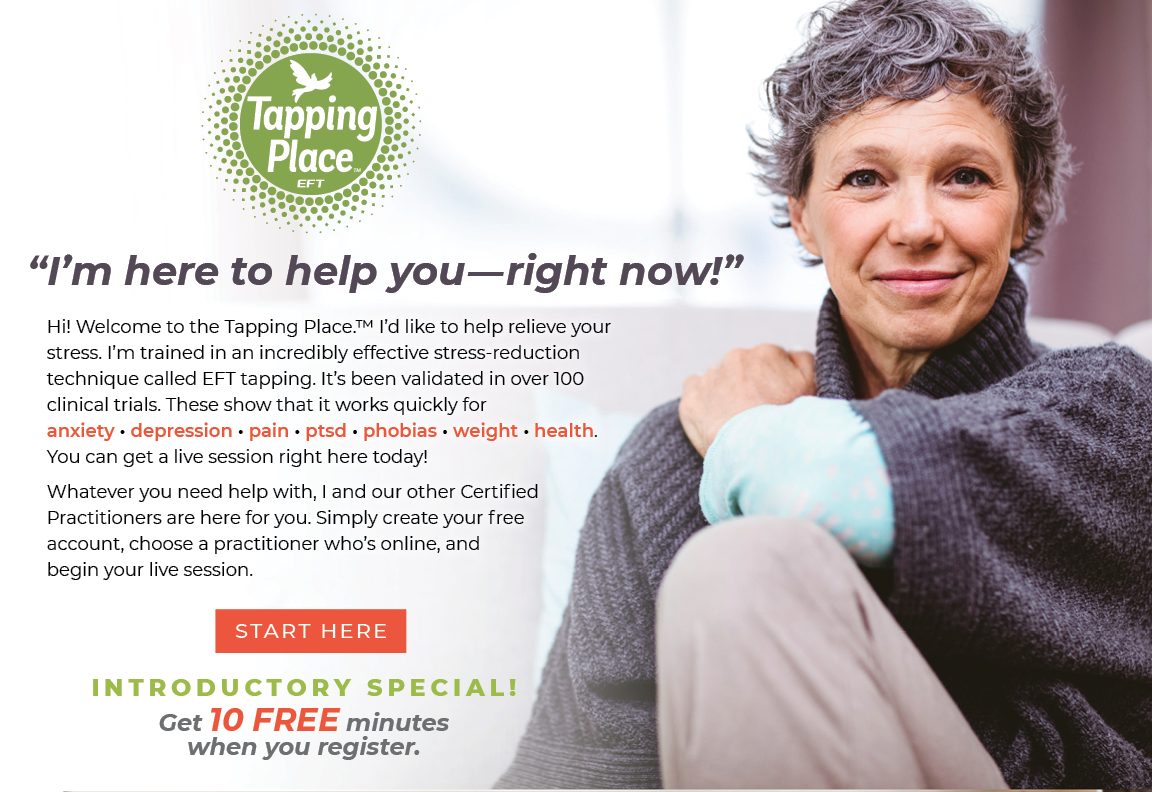 There are so many times when you need to tap right away. Wouldn’t it be great to have a live EFT practitioner available any time you wanted? When you’re in situations like:

Well, now you can get immediate help. You can tap with a practitioner any time you want! Yes, that’s LIVE! And it’s with a highly trained practitioner certified by EFT Universe. These are the practitioners whose skills have been validated in over 100+ clinical trials.

There you’ll find dozens of practitioners to choose from. You’ll see who’s online right now, make your selection, and be doing a live tapping session with a trained professional minutes later.

The Tapping Place is one of the most exciting new developments in EFT tapping in years. No more waiting to make an appointment with a practitioner next week. Dealing with time zones and unreliable technology. Driving all over the place to get to live appointments. Wondering if your practitioner is qualified to help you.

The Tapping Place solves all these problems for you. With the click of a mouse, or the tap of a finger, you can get the help you need, right when you need it.

The process is quick and simple. First, you’ll sign an Informed Consent form, and tell us about yourself. After setting up your username and password, you’ll be given a choice of practitioners who are online right now. You’ll make your payment, and start the session. We’ll even give you free minutes just for signing up!

How Does EFT Tapping Help?

EFT uses the ancient science of acupressure, in the form of fingertip tapping on acupuncture points, to restore the energy flows of the body that have been blocked or restricted. Research shows that tapping reduces the level of stress hormones such as cortisol. It even influences the genes that control your immune system and regulate inflammation in your body.

Over 100 studies show that EFT tapping can dramatically reduce the symptoms of:

The science is clear: EFT tapping is an evidence-based approach that can successfully clear the symptoms of both physical and mental distress.

About EFT and EFT Universe

EFT Universe is a 100,000+ member community founded in 2010 by Dawson Church, PhD, author of the best selling and award-winning science book, The Genie in Your Genes: Epigenetic Medicine and the New Biology of Intention.

The The EFT Mini-Manual and earlier editions of The EFT Manual have been downloaded by more than 2 million people.

The mission of EFT Universe is to bring the healing benefits of Emotional Freedom Techniques (“EFT” or “Tapping”) to the greatest number of people consistent with high standards of ethics, integrity, and professionalism.

EFT Universe training and research is based on the standards defined by the American Psychological Association’s (APA) Division 12 Task Force on Empirically Validated Treatments.

According to the APA standards, EFT has demonstrated efficacy for anxiety, depression, PTSD, and phobias.

Over 100 scientific papers about EFT have appeared in peer-reviewed medical and psychology journals. These include dozens of randomized controlled trials, outcome studies, and review articles by invesigators from Harvard Medical School, Perdue University, Stanford University, University of Arizona, and many other top institutions.

EFT Universe has the largest EFT training and certification program in the world, offering over 100 workshops and training over 1,000 practitioners each year.

Stories about Tapping and/or EFT Universe have appeared in the New York Times, Huffington Post, Reuters, Oprah Winfrey Network (OWN), the Times of London, Larry King Live, the Washington Post, Psychology Today, and ABCs “The View.”

Donations from EFT Universe provide the primary funding for the Veterans Stress Project, which has helped over 10,000 veterans recover from PTSD.

Back to EFT Universe