Chronic Back Pain Cured with EFT

Read this humorous account from Loreen McKellar of bringing relief to a veteran experiencing severe back pain with the use of EFT. 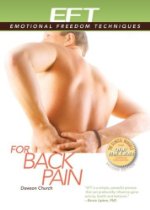 My client has ongoing lower back pain which he attributes to his time in the army. He had not used EFT for back pain because he had fantastic results with EFT for headaches. He thus assumed that EFT is for headaches only. However I received a call when he had been signed off work for two weeks after aggravating his back pain by lifting a heavy box.

He found it difficult to get out of his car, walking was very painful and his gait was tilting to the left. His face contorted with each step. He gingerly sat down and we started to discuss what the back pain could represent. As an ex-soldier it soon became clear that he was his own one man army. He stated:

We then discussed the pain which stretched across his lower back from left to right. It felt as if the pain was deep in the bone and it extended down the pelvis area. I asked what colour it was. "purple - like death." In his culture lilac is worn at funerals. It was jagged and stabbing him. We tapped using the whole EFT sequence including the nine gamut

After two rounds he stated he felt calmer and less tense but the pain was still there. We started to tap some more and I noticed he would shift around in a manner not conducive to back pain. It was almost as if he was aggravating his back. I first asked if he had a headache. He said, "No." For some reason I asked him if he had a stomach ache. I don't know why.

This grown man looked up at me like a little child and admitted he wanted to break wind but couldn't and that was causing him as much discomfort if not more than the back pain. We laughed and made an adult agreement that if we worked on his wind problem and the desired result was achieved we would celebrate it - no embarrassment.

I asked what phrases we should use and he said he felt as if he was holding everything in as he didn't like asking anyone for help. He did badly want to let go but just couldn't. So we tapped on holding life in, being afraid to ask for help and wanting to "let go."

After around 8 minutes of tapping and deep breathing - his wind section kicked in and there was a wonderful symphony. I think it was "Bridge Over Troubled Water!"

We cheered and then started to work on his back again. He said his back pain had now moved into the centre of his lower back, was white, round, unformed and throbbing. It felt as if it was floating above the bone now. Three unstructured rounds where I tapped as I felt and some deep breaths later, his pain moved to his right side. The wind symphony continued as we worked.

We continued with some tapping on any guilt he may have about taking time off work. He agreed he should rest his back even though the pain was significantly reduced. He was a responsible man, as his statements suggested, so there was no question of him being a slacker.

"This pain is light and manageable," he said. Then his face brightened and his whole body relaxed, "I thought I was going to be in pain for two weeks not two days. I feel I could go back to work tonight." He walked out normally.

He phoned me for a half an hour session the next day as there as mild pain in his pelvic area and he did want to go back to work. We tapped on his willingness to release the pain and again his willingness to not feel he has to control everything. We also worked on his need to accept that if he had to take the two weeks off, he would. At the end of the session he said he honestly felt better and that this was a miracle. He went back to work after three days sick leave.